Frigiliana is a Spanish town in the district of Axarquía located in the Natural Park of Sierras de Tejeda, Almijara and Alhama, so their environment is privileged for lovers nature and that of trekking.

Its white houses, its traditional cuisine and its Moorish past of narrow streets and passages make Frigiliana one of the favourite enclaves of those seeking to enjoy their holiday with all five senses. This town owns the purest popular architectural province of Arab origin and received the 1st National Award for Beautification of the Towns of Spain in 1982.

It is noteworthy that the British community residing in Frigiliana, as well as throughout the Axarquía, is very large.

The Palacio de los Condes (Palace of Condes) of Frigiliana, popularly known as ‘El Ingenio’, is a Renaissance mansion of the XVI century. It is currently the factory of molasses Nuestra Señora del Carmen (Our Lady of Carmen), the only traditional factory of this product that runs in Europe. In its facade, the decoration paintings with geometric motifs are highlighted. It was built partly with materials from the Moorish castle, which can be seen in the stones of its facade.

The church of San Antonio is the most prominent monument of Frigiliana. It was built in the XVII century in Renaissance style almost entirely. In the temple, there is a sculpture of San Anton of XVIII century made of polychrome wood. In the entrance porch, there is the choir, with a crown of rococo style, and on its main façade, you can see a shield of Bishop Fray Alonso de Santo Tomas.

Another monument worth visiting in the chapel of Santo Cristo de la Caña. The building dates from the XVIII century and has a revered size of neo-baroque style ‘Ecce Homo’.

We can also find in Frigiliana, the remains of the Arab castle of Lizar. It is located on the top of the town and dates from the IX century .

The festive calendar starts on January 20 with the Festival of San Sebastian, the Saint of the village. On that day, a Mass and a procession in honour of the saint, accompanied by fireworks is held. Formerly, this festival was extended to celebrate the Fair known as “”La Funcion”” but in 1966, it was moved to the month of June.

In February, the Frigilian Carnival is celebrated, although it is a young tradition, which has great reception.

In Frigilian, the International Festival of Oriental Dance is celebrated in April, and in May, the Cruces de Mayo or Day of the Cross are celebrated. And colourful flowers flood the streets of Frigiliana.

Fair of San Antonio de Padua is celebrated in June. Although it lasts for 5 days, there are numerous activities, the main event is the traditional procession held on June 13 and which is carried in procession of the Saint Patron in a wagon pulled by oxen.

The last weekend of August is celebrated as the Three Cultures Festival. Music, food and culture which come together in this event that has been declared of Tourist Singularity in the province. It includes performances, parades, exhibitions, a craft market, workshops and gastronomic tours, lectures on Islam, Judaism and Christianity, etc.

A festival recently created but has had great success is the Day of molasses. Although there is no fixed day, held in late April and its protagonist is the product of the earth, molasses. Throughout the day, visitors can enjoy numerous free recipes with this product. In addition, there are performances and various activities that accompany the holiday. 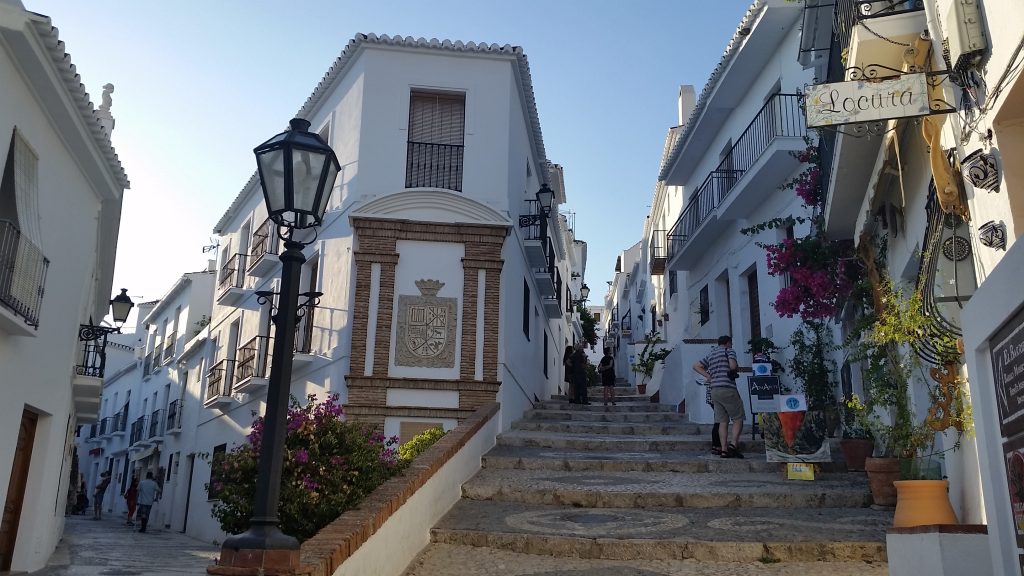 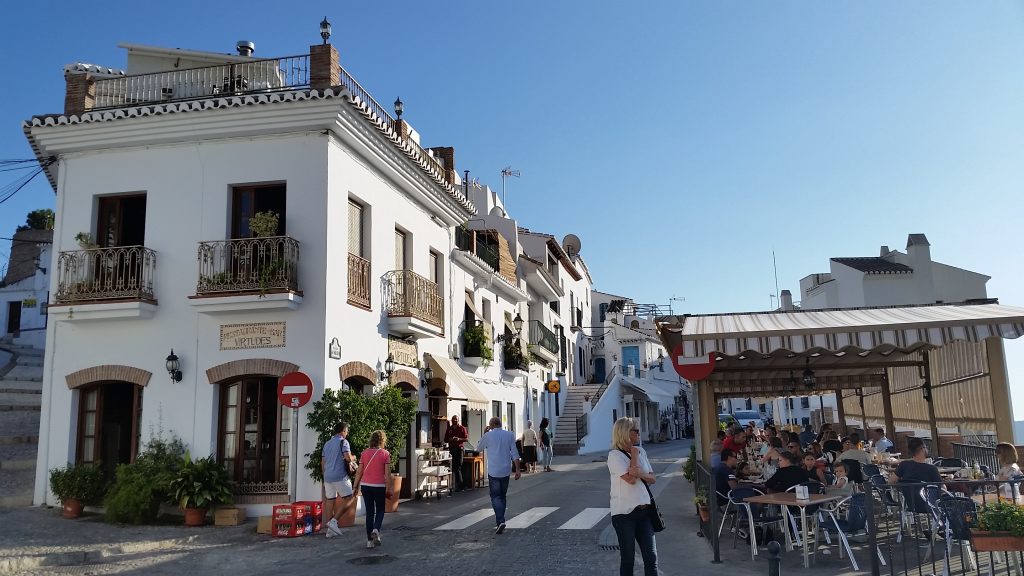 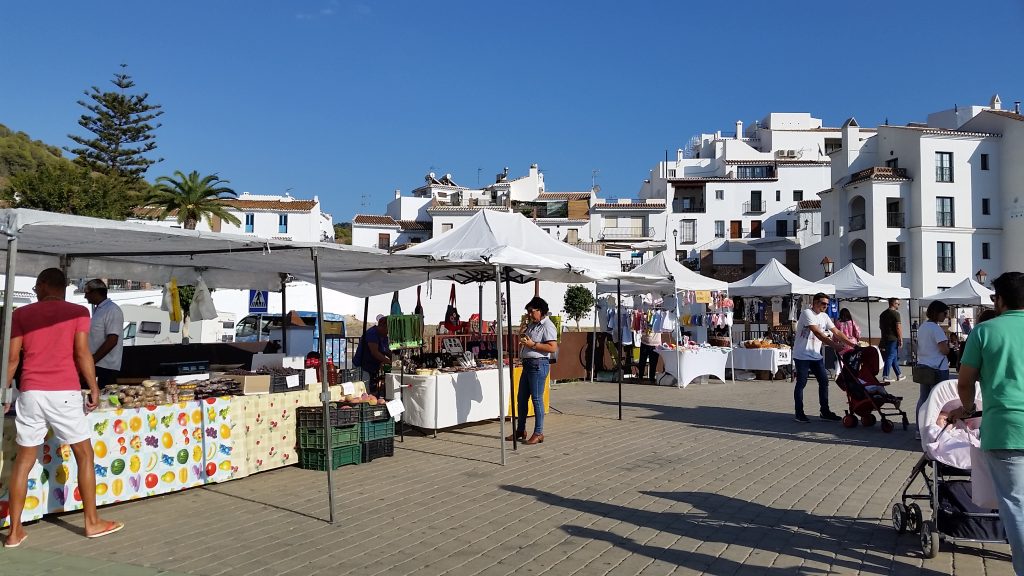 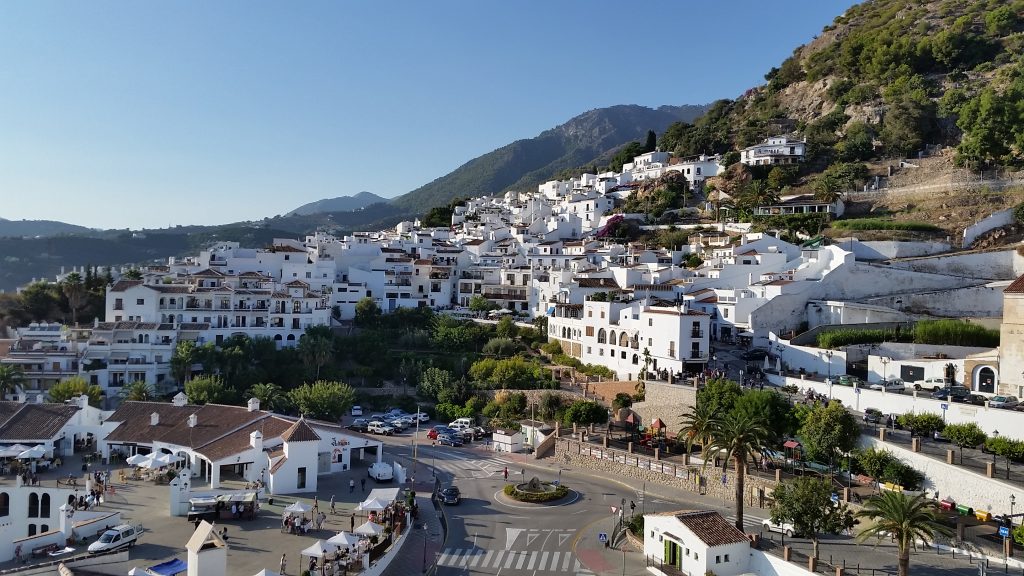 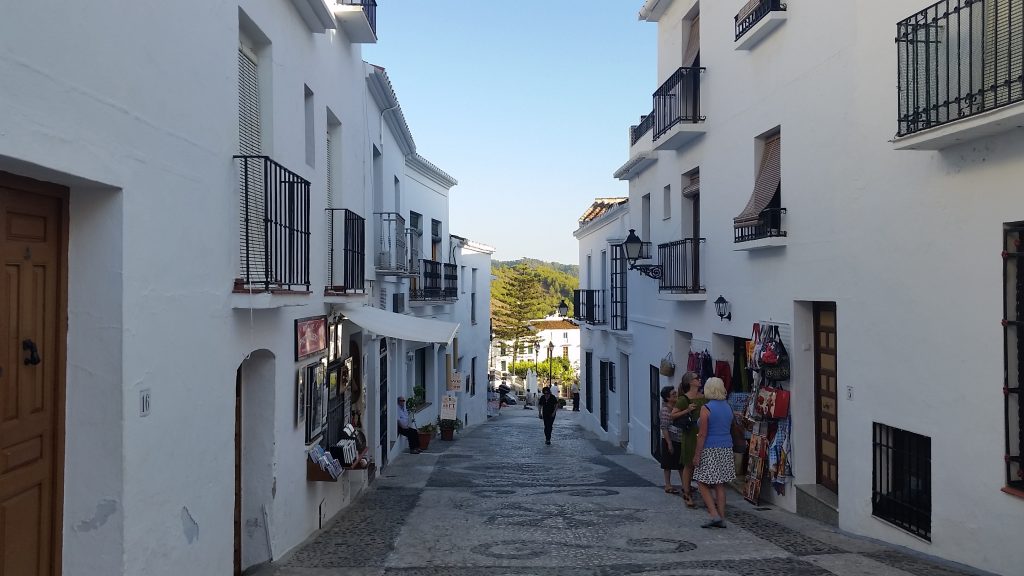 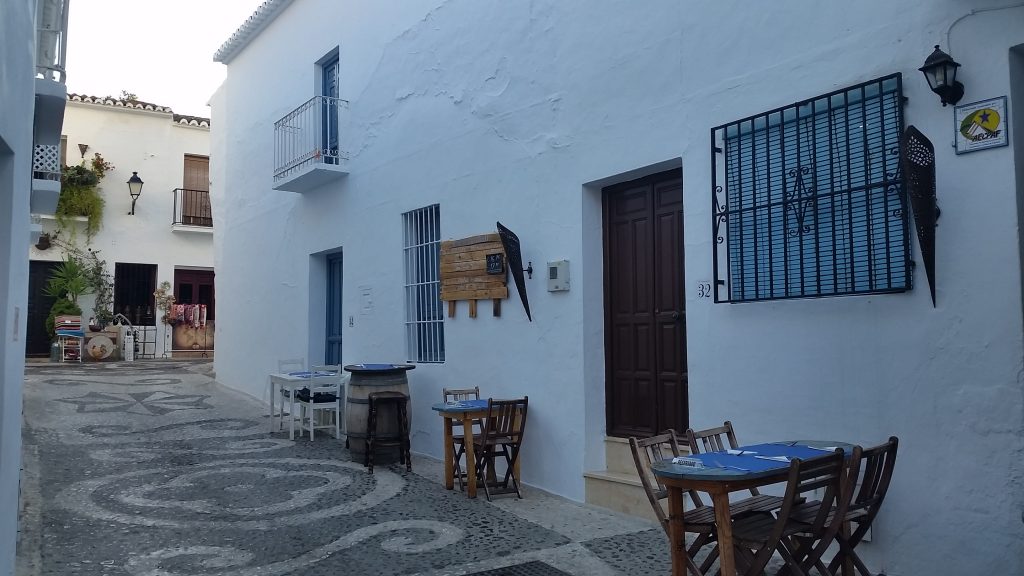 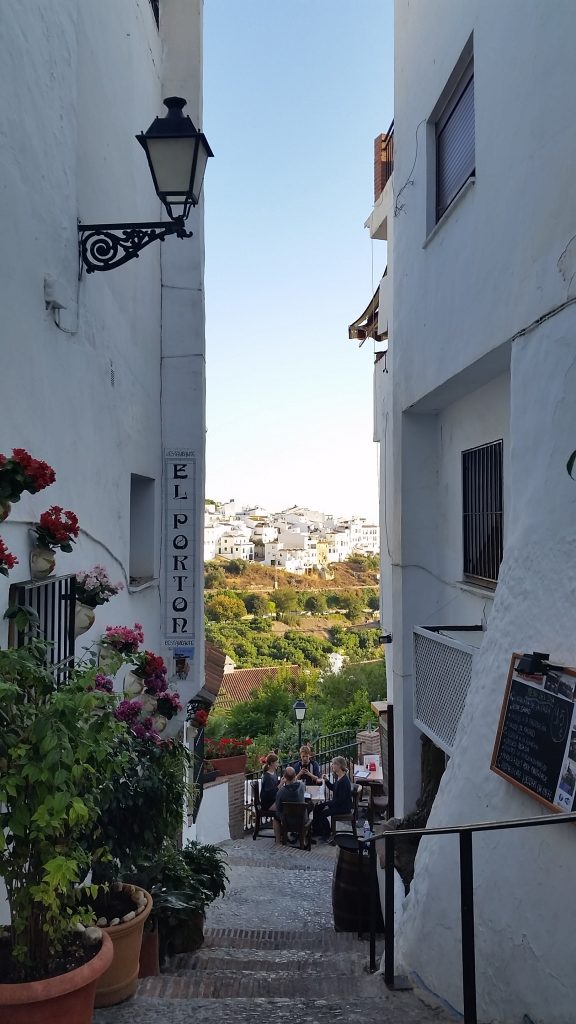 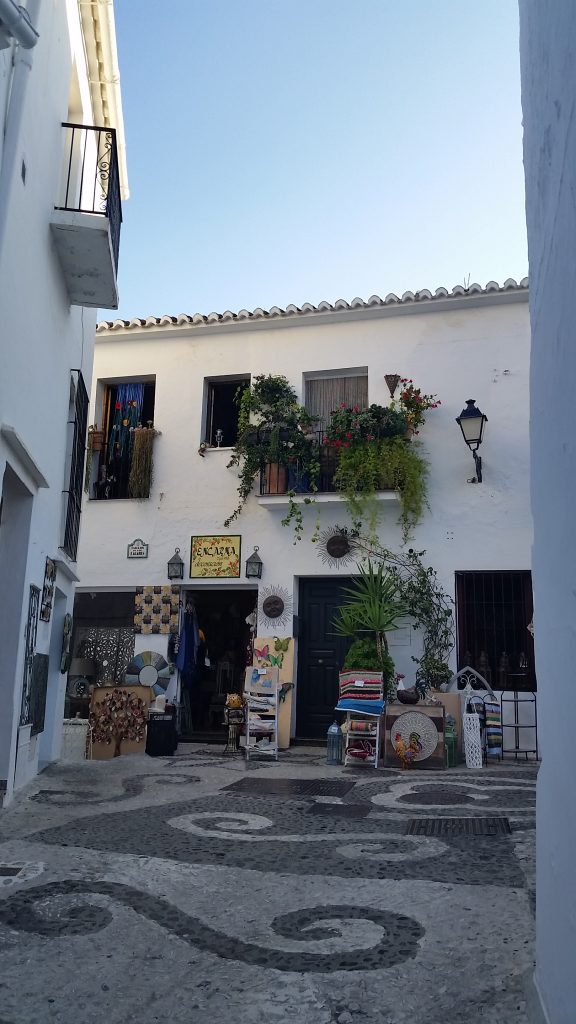 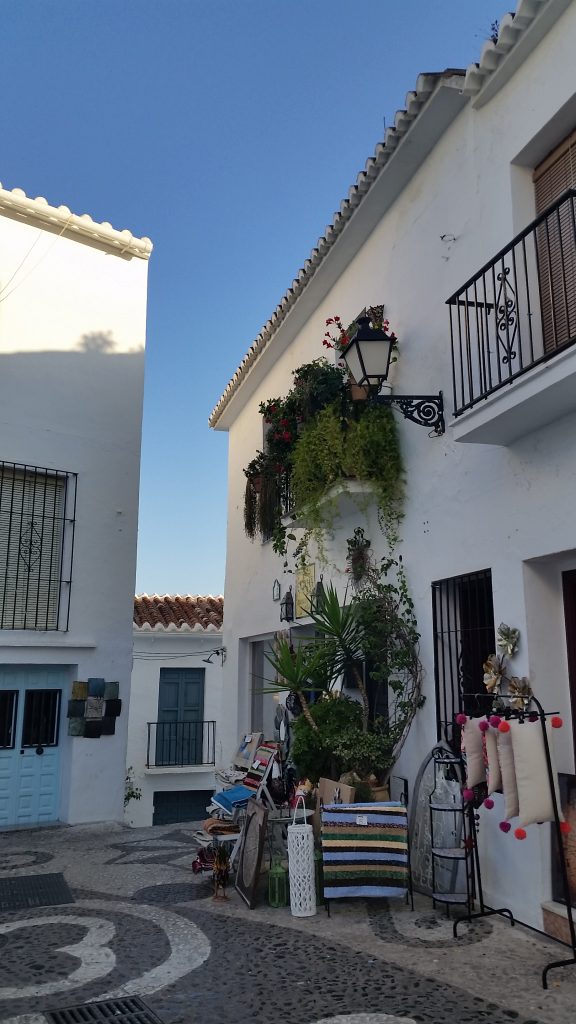 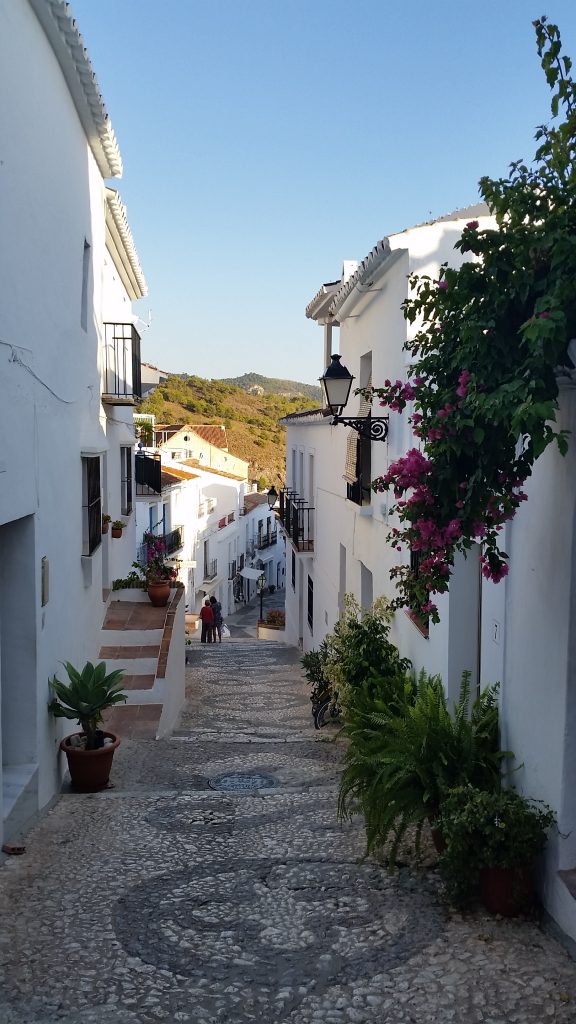 In the cuisine of Frigiliana, hearty dishes of traditional Axarquía cuisine are included like fried spiced lamb, fennel stew, the emblanco (a very mild white fish soup), or chick peas with tripe (usually pork). Another typical migas (bread crumbs sauté with garlic and accompanied by peppers and fried pork). As for the pastry they highlight the arropía and marcochas, homemade sweets based on molasses.

How to get there