The beach sits right on the border between the provinces of Malaga and Granada. Deciding on whether it actually falls on the Costa del Sol or the Costa Tropical is hard to do. The access and most of the beach falls on the Malaga-side, if you walk to another end of the beach you’d be in Granada. Then again, this area sits under the municipally of Almuñecar.

What to expect at Cantarrijan beach

A mixture of sand and shingle, as with all the beaches and coves in the Natural area of Los Acantilados de Maro, the surrounding area is rigorously protected and during the busier summer months, you will need to take a bus down there.

The water is exceptionally clean and has won various awards to that effect. As fishing is not allowed in this area (due to its protected status), the sea around Cantarrijan is full of fish.

It never ceases to amaze me the amount of fish and the clarity of the water….when compared to other beaches just a few kilometres along the coast. Goes to show you what the whole of the Costa del Sol and Tropical could look like with a bit of protection and care.

Needless to say, the snorkelling and diving in this whole area are brilliant.

The beach can be divided into two sections. The first – just in front of the two restaurants – is clothing ‘optional’ and the second tends to be completely naturist. On the occasions we have been down there around 90% of people are in the nude. It’s something you quickly get used to. 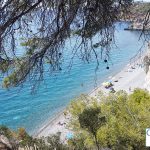 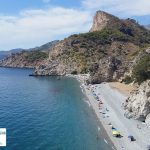 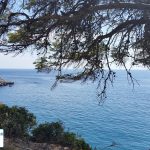 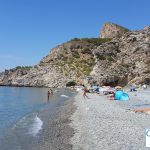 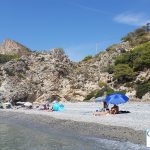 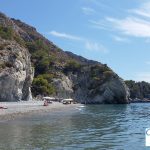